How important it is that hip dysplasia is detected in time. 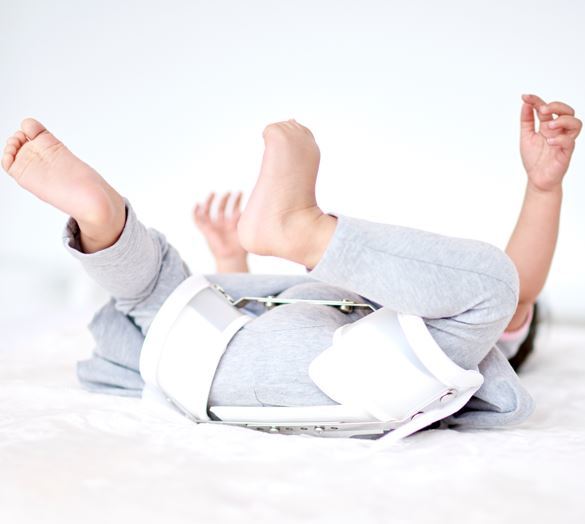 The story actually starts with my mother, she was born in 1941, but in the past it was not checked whether there was a hip abnormality in babies.
My mother fell out of a hospital bed as a baby and her hip joint was completely dislocated. Afterwards it turned out that there was hip dysplasia at the time, but not yet. The dislocated hip has been tried in such good and evil ways, but apparently the knowledge of that time was not such that they could restore it properly. My mother kept having problems with her hip. At the age of 10, her hip problems were so severe that she underwent surgery again. She spent 6 months in the hospital in a cast, when she was not allowed to go home yet, then she had to learn to walk again in the hospital. In total she had to stay in the hospital for 9 months of her young life. My mother has never been able to walk properly, She has always limped, she herself does not even know what it is like to be able to walk normally. Fortunately, she can drive a car, but with an adapted car. Walking or taking her to the zoo for a day is impossible, because she cannot walk for long. Because she has been limping all her life, her whole body has grown crooked and that got worse as she got older.

What a difference it would have been if they had already done research on hip dysplasia back then.

It was very different when I became a mother and my daughter turned out to have a crooked butt crack. After a visit to the doctor, we were referred to the Sint Maartenskliniek in Nijmegen. There, pictures were taken of her hips. A lead plate was placed on her uterus so that the X-rays would not end up there, but it was thought out very carefully because this is not taken into account in every hospital and that is certainly so important. The X-rays showed that there was hip dysplasia. At first panic, now what. My daughter got spread pants that she wore for 9 months. Of course she doesn't know anything about this anymore, but it looks pretty sad. At the time, hip dysplasia clothing was not available and it is more fun to dress your child in such a way that you do not immediately see that something is wrong with your baby. Fortunately I was very handy with the sewing machine and I started making hip dysplasia clothing myself. Pants that could be worn over the spreader pants, dresses with a higher waist so that they fall over the spread pants. Because it is so difficult to find clothes that can be worn over or under spread pants, I started making these myself. I noticed that there was a demand for this. I now also make pants and jumpsuits that can be worn over plaster pants and what about an extra wide sleeping bag in which children with spreader pants or plaster pants can easily sleep. You can find these clothes on our special spread pants clothing page. With the transport we had put a cushion in the car seat so that the leg fell over the sides of the car seat.

After 9 months of wearing spread pants, my daughter's hips turned out fine, unfortunately she never crawled, but moved on her butt.

When I was born myself, no research was done into a possible hip abnormality. Later it was checked whether I might have had hip dysplasia, but according to the doctor this was not the case. It seems as if the hip dysplasia skips a generation each time. Whether this is really the case, the future will tell.